The questionnaire used for this survey contains 69 questions divided over six sections, roughly reflecting the main legally relevant transitions that many families go through. In fact, legal rules often only make themselves felt to a family and its members when such a family goes through a major transition. Therefore the questionnaire was divided in the following sections:

For every country the coordinators invited at least two legal experts. The aim was to include for each country the one or two best available legal experts (working in practice, policy or academia) specialised in legal issues concerning same-sex partners, with ideally one of the experts also being specialised in family law. For several countries it was difficult or even impossible to find two available qualified experts in time. The non-availability of experts has thus impacted on the selection of jurisdictions for this project. In the end, for each of the countries now covered in the database, two good experts could be selected (three for the United Kingdom and Austria). A modest fee for their contributions to this project was agreed with each expert. Experts were selected on the basis of their participation in other projects or networks in this field, or on the basis of recommendations from such experts (some of whom had declined an invitation to join this project themselves). Several of the experts selected had also contributed to the 2005 report More or less together, and many of them are a member of the European Commission on Sexual Orientation Law (www.sexualorientationlaw.eu) and/or had been involved in the EU funded project Rights on the Move. Some of them had also joined the FamiliesAndSocieties project as a stakeholder or as a representative of an organisations that had joined as stakeholder.

The legal survey was conducted as a peer review process of seven steps (expert – review by other expert – expert – review by coordinators – expert – editing by coordinators – expert). Once two legal experts had been found for a country, then the six sections were divided between them (according to their own specialisations and preferences). So each expert would be the author of the answers in one or more whole sections. They then answered the relevant sections of the questionnaire by using the online web application (developed at INED in Voozanoo software of the company EpiConcept). After both experts for a country would have given their answers (including references, explanations and nuances), they would review each other’s answers. Then each expert adjusted his or her own original answers in light of the comments and suggestions of the other expert for that country. This was followed by a round of review by the coordinators (Kees Waaldijk and Natalie Nikolina, assisted by Giuseppe Zago and Daniel Damonzé). After this each expert was invited to further adjust their answers in light of the comments and suggestions of the coordinators. Then the coordinators checked if all comments and suggestions had been given due attention (sometimes asking for further clarifications), and they edited the text of the answers, references, explanations and nuances. Finally the expert was asked to approve all the edits.

Occasionally the review by the coordinators was done before or immediately after the review by the other expert. For countries consisting of different jurisdictions, typically one expert per jurisdiction would be asked to answer all sections of the questionnaire, and then an expert of another jurisdiction in that country would act as reviewer. For one country (Austria) all sections were answered by one expert, and each section was then reviewed by one of two other experts for that country. Experts for some countries were assisted by a research assistant who is mentioned in the first footnote of their source papers.

Most of the more than 40 legal experts completed most of their work by early 2016 (with their answers mostly covering legal developments upto 2015), while other experts completed their answers in 2016, often taking into account the most recent changes in law. This means that in the database the most recent year for some jurisdictions is 2015, and for other jurisdictions 2016. Hopefully there will be occasional updates in coming years, so as to reflect future legal changes (and any recent changes that came too late for this first round of the survey).

A Guidance document was prepared and made available to the experts. This Guidance for experts answering questions the LawsAndFamilies questionnaire on legal family formats for same-sex and/or different-sex couples provided them with  detailed information, for example on:

Apart from the Guidance document, the legal experts were also given a technical Manual on how to use the web application for answering questions and for commenting on answers given by the other expert.

The questionnaire for this project is largely based on the set of questions developed for and used in the 2005 report More or less together (Waaldijk, K. (ed.) (2005). More or less together: Levels of legal consequences of marriage, cohabitation and registered partnership for different-sex and same-sex partners. A comparative study of nine European countries. Paris: Institut national d’études démographiques (INED)). Since then, a number of issues gained prominence that were not adequately covered by the questionnaire. Therefore, a wide consultation has been held in 2013/2014 to get input regarding the ideal set of questions that can ensure a good picture of this dynamic and diverse field. These consultations led to useful suggestions from several partners and stakeholders of the FamiliesAndSocieties project, and from legal experts from various countries. And a final round of clarifications could be made thanks to legal experts from Spain who kindly agreed to answer parts of this questionnaire using a 2014 test-version of it. To a few questions a line of clarification has been added (sometimes referring to Guidance document), so as to ensure that different experts will interpret the questions in the same way.

The final version of questionnaire used in this survey contains 69 questions and has been divided into six sections, roughly reflecting the main legally relevant transitions that many families go through:

Almost all questions require separate answers for different-sex and same-sex marriage and for same-sex and different-sex registered partnership (as far as they are available in the jurisdictions concerned), and in most cases also for different-sex and same-sex cohabitation. (If a question had not to be answered for cohabitation, then an “X” appears in the relevant cells of the results.) Therefore, almost all questions have answers in six columns, one column for each same-sex or different-sex legal family format. Furthermore, each question is not only asked for the current period, but also for previous periods (ideally stretching back to 1965). Therefore, each of the six columns appears as a timeline. For each question, the legal experts were also given the possibility to provide references to the relevant legal source(s) and to provide explanations or nuances regarding the answers given. 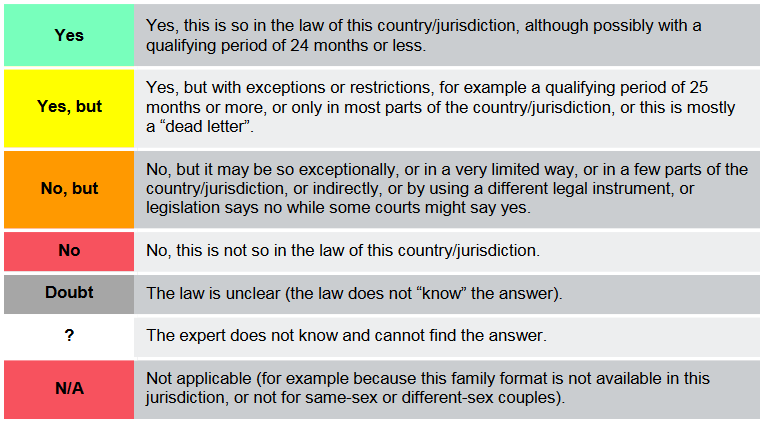 For each answer to a question, legal experts were asked to indicate what the answer was during previous periods. For each historical period they were asked to indicate the year until when the answer applied. Thereby  a vertical timeline was created for each same-sex or different-sex legal family format in each question (for an example see below and see point b of the Guidance document).

Originally the legal expert who could not find an exact year, was given the possibility to mention a probable year by adding a question mark to it (1989?), to indicate a decade (1980s), or to put a question mark (?). Unfortunately, later these options had to be cancelled because of the possibilities of the database software. Since then the expert could only indicate uncertainty about the beginning or end of a period, by providing a “?” as the answer-code for the uncertain years.

If an expert could not close a timeline with a year before 1965, they were asked to close the timeline by inserting the year “0000” (meaning that the answer applied since a day in an unknown year before 1965). When it was not possible to provide answers going back that far, the experts were encouraged to go back at least to the time that the answer was “No” or “N/A” for cohabiting and/or same-sex relationships. For example (with the colours that have been attached to these answer-codes in the database): 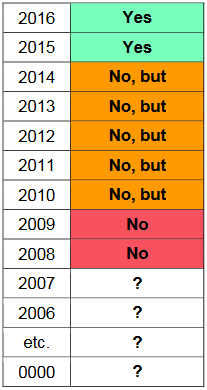 The colours for the answer-codes have been chosen so as to facilitate easy understanding. The (“traffic light”) colours green, yellow, orange and red, symbolise the attitude of a legal system towards a certain family format. The colour grey indicates there is a “grey area” (the law itself is in doubt) and the colour white indicates there is “white spot” (no information). The colour white has not only been used when an expert answered with a “?”, but also when a question was not asked for a specific legal family format (“X”) or when a question was not answered at all.

In this database the term “jurisdiction” is used both for whole countries and for the main regional/provincial/state parts that a country may have.

By “residence” and “residing” is meant: having lawful residence and/or, as the case may be, domicile, habitual residence, etc. (see point c of the Guidance document). When choosing an answer-code (and unless the specific question implies otherwise), the legal experts were asked to make the following five assumptions when answering the questions:

This way, in most cases the chosen answer-codes do not need to reflect possible international or interregional complications (nor the eventuality of the partners not living together). The legal experts could choose to say something about such complications in the explanations. There are several questions that specifically deal with international complications. Section 4 (Migration) includes four questions about the recognition of foreign marriages and foreign partnerships (questions 4.2, 4.4, 4.5 and 4.6) and two about foreign adoptions (4.8 and 4.9). This section furthermore includes questions about individuals with a foreign citizenship (questions 4.1 to 4.4 and 4.7); Section 1 (Formalisation) also includes such questions (1.3 to 1.7). In most questions, however, the jurisdiction of citizenship of the partners is assumed to be the same as the jurisdiction of residence of the partners, and also the same as the jurisdiction of celebration (that is: the jurisdiction where the marriage or partnership was entered into).

At the end of each section a “background” question is included (and in sections 1 and 3 one or two other open questions) to provide the legal experts with the opportunity to give a better overall picture, and to mention issues that are relevant in the country/jurisdiction but that were not included in other questions